With so many laws dictating web accessibility requirements, it is important to fully understand the impact of each law so that you can be in compliance and provide access to your content. The Rehabilitation Act of 1973 is one of three major accessibility laws in the United States, and has two sections which directly impact video accessibility. This post will cover the specific requirements of  those sections – Section 504 and Section 508 – as well as the more recent 508 Refresh. 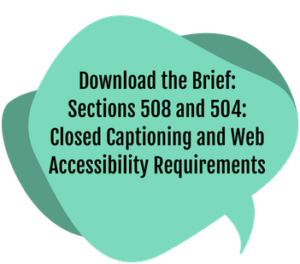 The Rehabilitation Act, enacted in 1973, is a federal anti-discrimination law that implicates federal and federally funded programs in their treatment of individuals with disabilities. The Rehabilitation Act originally placed the most emphasis on equal employment practices, reasonable accommodations, and federally subsidized programming for individuals with disabilities. However, amendments to the act have led to a more far-reaching interpretation of the law. With the advent of the Internet, an amendment (Section 508) was signed into law in 1998, expanding the Rehabilitation Act to include equal access to electronic and information technology.

Section 504 is widely considered to be the first statute to declare civil rights for individuals with disabilities. It states specifically that: “No otherwise qualified individual with a disability in the United States […] shall, solely by reason of her or his disability, be excluded from the participation in, be denied the benefits of, or be subjected to discrimination under any program or activity receiving Federal financial assistance or any program or activity conducted by any Executive agency or by the United States Postal Service.”

In addition to federal programs and agencies, the law implicates programs that receive federal funding, which subsidizes airports, colleges and universities, federally assisted housing, and public libraries, among others. Section 504 further implicates any “local educational agency, system of vocational education, or other school system,” meaning that K-12 schools are prohibited from denying public education or extracurricular activity participation because of a child’s disability.

In 1990, the Americans with Disabilities Act (ADA) extended many of Section 504’s rules to the public sector. The ADA exists separately from the Rehabilitation Act, but is generally perceived as an expansion of Section 504 that protects a broader range of individuals with disabilities. The ADA, in fact, contains a provision that nothing within the law amends, overrides, or cancels anything in Section 504. Say what? This means that even if you are not implicated by Section 504 (Federal or federally funded programs), you may still be implicated by the ADA and face very similar accessibility requirements.

Section 508 covers access to federal programs and services in regards to electronic and information technology. This law requires that alternative, accessible information technology – meaning, a system that can be operated in a variety of ways and does not rely on a single sense or ability of the user – be provided to disabled employees and members of the public. Similarly, it ensures accessibility to web content.

Section 508 states that, “When developing, procuring, maintaining, or using electronic and information technology, each Federal department or agency […] shall ensure, unless an undue burden would be imposed on the department or agency, that the electronic and information technology allows, regardless of the type of medium of the technology, individuals with disabilities […] to have access to and use of information and data that is comparable to the access of [those] who are not individuals with disabilities.”

Section 508 and the Assistive Technology Act

While it is up to some debate as to whether federally funded programs must comply with Section 508, there are certain stipulations that often require these programs to provide accessible technology and web content. For example, the Assistive Technology Act will not provide funding to states unless they guarantee that all programs – including colleges and universities – will comply with Section 508. Many states have enacted laws similar to Section 508 that extend to state funded programs.

Section 508 and the Americans with Disabilities Act

While the ADA did not originally set forth requirements for electronic and information technology similar to Section 508, recent court decisions have implicated online businesses as being in violation of the ADA. For instance, in a lawsuit against Netflix, the court construed that Netflix was implicated as a “place of public accommodation,” a provision of the ADA that had previously only been applied to physical structures. If the court’s trend of implicating electronic and information technology in its interpretation of the ADA continues, it would extend the requirements of Section 508 to the public sector. The World Wide Web Consortium’s collection of Web Content Accessibility Guidelines (WCAG) is quickly becoming the international standard for web accessibility. WCAG, the most comprehensive accessibility guide, had no legal backing in the United States until recently. The Section 508 Refresh directly references WCAG 2.0, thereby broadening its coverage to all content covered under Section 508. The refresh covers more documents, more technology, and more people, as WCAG specifies levels of compliance – Level A, Level AA, and Level AAA – in addition to testable provisions. While there is some debate over Section 508’s direct influence, there are many other laws that extend Section 508’s impact to non-federal programs. As mentioned earlier, the Department of Education requires that states that receive funds under the Assistive Technology Act – and most states do – are also required to comply with Section 508. In addition, certain states have imposed laws that reference Section 508’s requirements, extending web and electronic technology accessibility law to the state level. This means that even if you are not a federal program, it is possible that your organization is still indirectly required to comply with Section 508 standards, either through state law or through the Assistive Technology Act.

According to the Technical Standards of Section 508, all analog and digital television displays, as well as all computers, must be equipped with the technology necessary to properly decode and display closed captions. Further, any video – online or otherwise – that is not raw footage, is used for training or information purposes, contains audio that is essential for understanding the presentation, and/or supports the organization’s mission, must have open or closed captions. The technical standards also note that the captions should incorporate important non-speech sounds.

As seen with the Section 508 Refresh, which makes its standards more applicable to the modern Web, web accessibility requirements for online video and other Internet content are only likely to increase as video and technology continue to become more prolific. It is important to set up workflows that can easily be expanded to incorporate new and adapted standards. Note: This blog post was originally published by Lily Bond on January 8, 2015. It has since been updated.

Universal design for learning, also known as UDL, is the design of products and environments to be usable by all types of people without the need for adaptation or specialized design. UDL is all about giving learners options. Students are composed of…