The Federal Communications Commission requires that all full-length videos delivered via Internet protocol (IP) have closed captions if they air on broadcast or cable television with closed captions. As such, the EMA Closed Captions Working Group was created to better understand the legal requirements for closed captioning of IP video programing. Captioning requirements have been dependent on various deadlines for online video accessibility, directed by the 21st Century Video Accessibility Act (CVAA) and enforced by the FCC.

When a Closed Caption File is Not Available

Sometimes a closed caption file is not provided for a piece of IP‐delivered video programming. Occasionally this is to be expected. The VPO should include one of the below statements in both the avails and the metadata for that programming:

More about the EMA

For a broadcast video to be delivered via the Internet with closed captions, the closed caption file must be converted from the CEA‐608 protocol used for television to a format suitable for Internet delivery. Captions can then be edited to display properly online. There are several file formats suitable for Internet delivery: SCC, SMPTE-TT and DFXP. Conversion from CEA-608 and subsequent editing can be done manually or from scratch. These options are undesirable because they are time-consuming and expensive. The EMA Closed Captions Working Group suggests utilizing software to extract and reformat the captioning data. With closed captioning software, conversion can be challenging, especially when it involves a broadcast closed caption file in a legacy format. It is best to have the closed caption file delivered in a format that is relatively easy to extract and reformat.

Best Practices for the Conversion of Television Closed Captions

The preferred file format for delivery of closed caption files at this time is the SCC format (.scc file extension). The EMA working group favors the SCC format because it contains all of the CEA‐608 information and is very concise and unambiguous. It is also widely used and well understood by all captioning software. The working group proposed that the following TTML formats are also acceptable:

Some additional notes and recommendations: 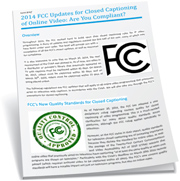 The EMA working group also proposed some best practices to address caption frame rate issues. Closed caption data files are separate from the video data files. Ideally, the caption frame rate should match the native frame rate of the source. However, synchronization of the two can be a problem. Why is this? Television in North America is usually broadcast at a rate of 29.97 frames per second (FPS). Internet video delivery, however, can support a variety of frame rate formats and a number of VPDs require films and TV shows stream at a frame rate of 23.976 or 25 FPS. This means that frame rate requirements for North American broadcast TV will not match requirements for the Internet video frame rate. As a result, the frame rate of the caption file must be reconfigured to the frame rate utilized by the Internet video content distributor, and if necessary, the time code must be stretched or shrunk. This is easier said than done. Potential frame rate difficulties include:

Have more questions about closed captioning IP video programming? Don’t hesitate to get in touch with 3Play Media