On May 3, 2016, the European Commission announced that they have officially approved new rules for web accessibility for EU government websites and apps.

In a press release, Günther H. Oettinger, Commissioner for the Digital Economy and Society, stated:

“It is not acceptable that millions of European citizens are left behind in the digital society. The agreement that we have just reached will ensure that everyone has the same opportunity to enjoy the benefits of the internet and mobile apps, to participate in society to a fuller extent and to lead a more independent life.”

“Internet access should be a reality for everyone. Leaving millions of Europeans behind is not an option. Tonight’s agreement is an important step towards a Digital Single Market, which is about removing barriers so that all Europeans can get the best from the digital world.”

This is a major victory for Europeans with sensory disabilities, and it has been a long time coming. Since 2006 the European Commission has required WCAG 1.0 Level AA compliance for all Commission websites. Government websites of individual nations in the EU, however, were not subject to any centralized accessibility rules. This year’s directive aimed to change that.

The European Commission first proposed this directive in December, 2012. In subsequent years, the EU adopted the UN Convention on the Rights of Persons with Disabilities and issued the European Disability Strategy 2010-2020, both steps in the right direction toward expanding digital access for blind and/or deaf people.

Yesterday, the Commission officially agreed to adopt the directive.

The specific language of the rules still need to be written and formally approved by the European Parliament and the Council. After it is published, EU member states have 21 months to incorporate the directive into national laws.

New rules accepted in the EU web accessibility directive are:

The Commission aims to provide specific standards for web accessibility, possibly taken from WCAG, but they have yet to announce their chosen standard.

The Effects of the New Directive

In addition to providing much-needed access to digital services, the EU’s web accessibility directive has even more positive repercussions.

Dita Charanzová, the rapporteur of the Directive on Web Accessibility for Public Sector Websites, explains how the new measures will save EU governments untold costs in time and money.

If implemented by the member states, even taking into account short term-costs, a fully accessible public sector will save tax payers millions of euros from fewer call centres, fewer letters, and other costly alternatives. The long term benefits far outweigh the short term transition.

Note, however, that the directive applies only to government websites and apps in the EU, not private businesses. Web accessibility for non-government bodies are still regulated on a nation-by-nation basis.

To learn more about how to make websites accessible to everyone, check out: 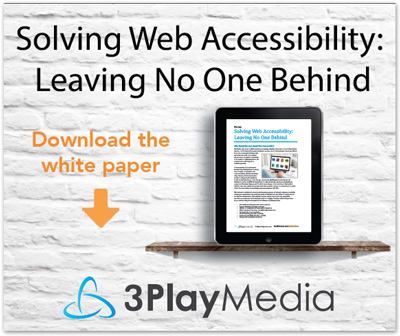