We’ve covered the various disability laws and FCC mandates that require closed captioning for video in the US, as well as how the AODA affects subtitling in Ontario, Canada.

The United Kingdom has its own rules and regulations around subtitles for television and other broadcast media. Here’s an overview of the major laws, codes, and recommendations for subtitles in the UK.

British parliament passed the first piece of subtitle legislation in 1990: the Broadcasting Act.

The act required public broadcasting stations to “provide minimum amounts of subtitling for deaf and hard-of-hearing people and to attain such technical standards in the provision of subtitling as the ITC specifies.” ITC is a Technical Performance Code that governs technical standards for subtitles. The current UK standard for subtitle transmissions via teletext is ITU-R (CCIR) Teletext System B.

Although the Broadcasting Act is viewed as largely deregulating British broadcasting, the inclusion of subtitling for the deaf and hard of hearing is a welcome redeeming factor.

In contrast to the Broadcasting Act, the Communications Act introduced sweeping regulations. For example, the act made it illegal to steal your neighbor’s Wi-Fi connection, or to stalk and harass people online.

The Communications Act expanded requirements for UK broadcasters to provide ‘television access services,’ like subtitling, sign language, and audio descriptors. These new provisions are specified, reviewed, and enforced by Ofcom.

Ofcom was created in 2002 by the Office of Communications Act, but was granted full regulatory authority the following year by the Communications Act. Like the US’s FCC, Ofcom presides over licensing, policies, complaints, and protections in telecommunication and broadcasting.

All commercial television and radio broadcasts in the UK are licensed by Ofcom and are therefore subject to its regulations. Viewers can submit grievances to Ofcom, who will investigate whether or not the broadcaster violates the Broadcasting Code and take appropriate recourse.

In a May 2013 study with Action on Hearing Loss, Ofcom found that:

With data to back their cause, Ofcom strives to raise awareness of the benefits of subtitles and puts pressure on channels within their jurisdiction to add subtitles to their programming.

Section 303 of the Communications Act is titled “code relating to provision for the deaf and visually impaired.” It achieves two things:

For more clarity on how these subtitling regulations work, let’s look at the Ofcom codes in more detail.

Ofcom’s Code of Guidance on Standards for Subtitling

In a Forward, this code explains what makes subtitling such a unique communication challenge and why it is so important.

“Subtitle editing is different from most other forms of text editing. Not only is the medium more dynamic than most others, but also the target audience is not a homogenous group. Although the common voice of deaf and hard-of-hearing people is that they require access to television, they vary in terms of literacy, hearing loss and socio-economic factors. With the increasing size of an aged population, the preferences of the elderly in particular should be taken into account.”

Digital Terrestrial Television has its own set of rules for subtitling. Here are a few of them:

“Losing subtitles is as frustrating for the hearing-impaired viewer as losing sound is for the hearing viewer. If subtitle insertion does fail, prompt transmission of an appropriately worded apology caption is extremely important and, if restoration of transmission is delayed, an early explanation is to be given.”

The most current version of this code was published in December 2012, and can be found on the web here.

This code sets the specific requirements for subtitling, sign language, and audio description for licensed television broadcasters. Broadcasters need to reach certain accessibility milestones 5 years and 10 years after the ‘relevant date’: 60% of all programming must be subtitled by year 5, and 80% must be subtitled by year 10. Unless otherwise specified, the ‘relevant date’ is the first date of licensed broadcasting.

Yearly benchmarks are set in the interim. The exact dates and requirements vary slightly by channel, and the BBC has set their own timetable. For all others, the timeline looks like this: 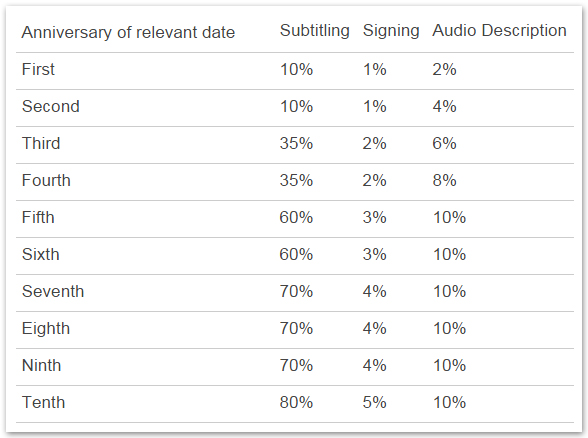 To Whom Does This Code Apply?

This code applies to:

Ofcom can exempt certain programs from the subtitling requirement based on the following factors:

Authority for Television on Demand (ATVOD)

The Authority for Television On Demand (ATVOD) is an independent co-regulator for video on demand in the UK. In September, 2012, the ATVOD consulted with disability experts and media industry professionals to produce Best Practice Guidelines for access services for video on demand. The full PDF can be found on the web here.

Pages 6-8 address subtitling best practices. After reviewing the definition of subtitles and who benefits from them, the guide makes an interesting recommendation for how to prioritize subtitling certain programs:

“Service providers should give priority to the most popular programmes, as subtitling on these is likely to benefit most people. Service providers should also bear in mind subtitling programmes likely to be of more interest to older people, as these account for a large proportion of subtitle users. As provision of access services grows, the emphasis of programme selection should shift towards subtitling a broader range of programmes appealing to different types of viewer.”

The guide drills into the details of subtitle placement on screen, illumination and color-contrast of font, and synchronization with the spoken text. It recommends target speed of subtitle display and transition (160-180 words per minute), with the exception of subtitles aimed at a young audience:

“Slower speed and more heavily edited subtitles are appropriate for young children, though care should be taken to ensure that these are accurate and grammatical, as children and parents use subtitles in developing literacy skills.”

This is an intriguing exception to the recommendation for maximum accuracy: subtitles can be edited to be more easily understandable by children, so long as the original meaning and intent is preserved.

Twitter Can Now Remind You to Add Alt Text

Accessible Social Media with Alexa Heinrich [Free Webinar] Have you ever scrolled through Twitter and noticed an image with an ALT badge? If so, you’ve come across an image with alt text. Twitter’s ALT badge indicates that the author has added alternative,…

The Rise of Accessible Gaming

Inclusive Design in XR and Beyond [Free Webinar] The online gaming community is one of vibrance and diversity. It is also enormous: More than 216 million people in the U.S. play video games regularly, and the booming industry is expected to grow…