Faces Behind the Screen: Christine Ha 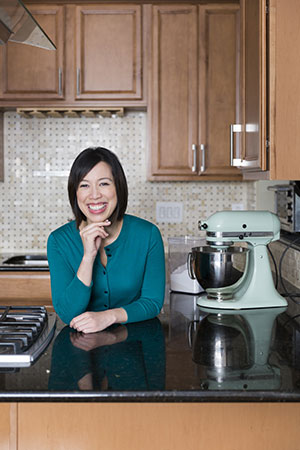 In 2012, Christine Ha was crowned the MasterChef winner of season three, beating over 20 contestants for the coveted title.

Throughout the season, Christine blew judges away with her delectable, beautifully plated dishes inspired by her Vietnamese roots. Despite all the challenges and obstacles thrown at her that season, Christine persevered and shattered all preconceptions as the first legally blind contestant on MasterChef.

Today, she is still making waves in the culinary industry and even recently opened her first restaurant called The Blind Goat in Houston, Texas. What is neuromyelitis optica (NMO) and when were you diagnosed?

CH: NMO is an autoimmune condition affecting the neurological system, primarily the optic nerves and spinal cord. It is similar to MS. I was officially diagnosed in 2004.

What is your greatest struggle right now?

CH: Shattering the social stigma placed upon those with visual impairment or NMO.

When it comes to technology what are some everyday issues you run into that sighted people might not?

CH: All the new technology utilizes a touch screen or comes with too many options. Sometimes, we just need a machine to do a few things and have tactile buttons or switches with haptic feedback.

How did you get into cooking?

CH: I taught myself when I was in college because I moved out of the dorms and wanted to teach myself how to cook. Were you nervous to compete in MasterChef? What inspired you to compete?

CH: Yes, I was nervous. My husband, John, is a Gordon Ramsay fan and encouraged me to audition.

How do you plate?

CH: I visualize the image of my final plating in my head—I think it helped that I used to have vision—then I set about replicating the image with my hands.

What was the most challenging aspect of competing in MasterChef?

CH: Being taken seriously. Also during field team challenges, it was difficult to orient myself and learn a new environment when I didn’t have my sense of sight to depend on.

What’s your favorite food to cook?

CH: I love cooking anything I haven’t tried cooking before. Congratulations on opening The Blind Goat! How was that journey and how did you come up with the name?

CH: It’s been a big challenge, but I knew it would be, and I believe the biggest rewards in life come from the biggest challenges. I am known as the blind cook, and I was born the year of the goat, hence The Blind Goat.

CH: Either winning MasterChef season 3 or when I found out my cookbook, Recipes from My Home Kitchen, was a New York Times best-seller.

Can you describe a moment when you felt discriminated against because of your vision loss?

CH: Every time I was picked last for a team challenge on my season. Or nowadays, when people online tell me it’s impossible to cook if you don’t have sight.

What do you wish sighted people could know about your experience?

What’s the best thing about being blind/low vision?

CH: Being able to skip most queues. Not being able to judge a person by their appearance. CH: That they have to talk louder or slower for us to understand. Or when they grab your arm to guide you (you should let the low vision person take your arm for guidance).

Faces Behind the Screen would like to thank Christine Ha for participating in our storytelling project. If you’re interested in sharing your story with us, fill out our nomination form.