Did you know that the importance of captioning is growing? For starters, there’s an increasing number of ADA website lawsuits being filed against organizations failing to provide video captioning for d/Deaf and hard of hearing people, as well as other digital accommodations for blind, low vision, or other persons with disabilities. For organizations looking to avoid being sued, captioning has never been more critical.

The Deaf and hard of hearing community is growing, and it’s critical that as technology changes and video use increases that video is made accessible to this group.

The importance of captioning is also growing due to several other reasons which are as prevalent as the current litigation landscape. The fact that technology is changing, that video use and popularity is increasing, and that the deaf and harding of hearing population is growing are all cause for the rising relevance of captioning.

Captioning is defined as the “process that involves dividing transcript text into chucks, known as ‘caption frames,’ and time-coding each frame to synchronize with the audio of a video…Captions allow viewers to follow along with the audio and video or captions interchangeably.”

Captions can (and should) be used for television shows, movies, employee training videos, YouTube video blogs, and much more. These are just some of the ways that captioning benefits viewers:

In addition to being extremely useful for the d/Deaf and hard of hearing community, captions provide assistance to those whose native language isn’t spoken within the video, and help viewers with learning disabilities or attention deficits more easily maintain their concentration.

Why the Importance of Captioning Is Growing

Captioning has always been important, but with changing technology, the rise of video popularity, and the growth of the deaf and hard of hearing population, it’s become more pertinent than ever before.

The Americans with Disabilities Act (ADA) is a broad disability law that requires places of public accommodation to be made accessible to those with disabilities. Though online accessibility laws are not explicitly written into the ADA, recent litigation has ruled more in favor of website accessibility, deeming them places of public accommodation and requiring accessibility standards such as captioned video. This trend can be seen in the rising number of ADA website suits over the last several years, and is made evident in case outcomes like that of National Association of the Deaf (NAD) v. Netflix.

The fact that he law doesn’t specifically address accessibility in new technologies doesn’t diminish the importance of captioning. When the ADA was enacted in 1990, no one predicted society would be streaming thousands of movies and TV shows via the internet. Technology changes, though, and now nearly everyone uses or has used Netflix to watch their favorite programs.

This idea of changing technology and how it applies to accessibility is relevant for much more than entertainment:

Employers are turning to digital technologies for training and communication purposes, online retail is becoming more and more popular, and classrooms are using videos as learning aids in classrooms. This technological progression won’t stop, and emerging technologies will steadily stream in begging the question, how can these new technologies be made accessible?

One of the simplest answers is to utilize captioning which is a vital part of making video technology accessible to d/Deaf and hard of hearing individuals.

It may not come to you as a surprise, but the use of online video is increasing rapidly. Today, there’s more video uploaded to the web in one month than television has created in the past thirty years. In addition to the copious amounts of video flooding the web, people just can’t seem to get enough of it.

A Nielsen poll revealed that U.S. adults spend over 11 hours per day connected to media, and that 6 of those hours are spent watching video. In 2017, online video accounted for 74% of all internet traffic, and by 2018, that number is estimated to rise to 80%. To give a glimpse into social media video, over 500 million people watch video on Facebook daily. It’s pretty clear that video isn’t going away, and that it will only continue to grow.

Because of the popularity of video, more organizations and companies are turning to it for their marketing efforts. It’s true that video can boost SEO and brand recognition, and captions enhance its ability to do so. On Facebook, 85% of videos are watched without sound. Overall, 41% of videos are incomprehensible without sound or captions, and 80% of viewers react negatively to videos auto-playing with sound.

The importance of captioning lies in its ability to make video more accessible in numerous ways. It allows d/Deaf and hard of hearing individuals to watch videos, helps people to focus on and remember the information more easily, and lets people watch it in sound-sensitive environments. As the use of video increases, organizations and video creators must keep in mind that captioning, though originally created for those with hearing loss, is beneficial to everyone.

As mentioned before, captions benefit everyone, but they’re imperative for making video accessible to d/Deaf and hard of hearing people. Within the U.S., 48 million people are d/Deaf or hard of hearing. Globally, there are 466 million people with disabling hearing loss, that’s 6.1% of the world’s population. The World Health Organization (WHO) estimates that that number could rise to 630 million by 2030, and then to 900 million by 2050.

Why is there a growing deaf and hard of hearing population, though? There are several factors contributing to rising rates of hearing loss: 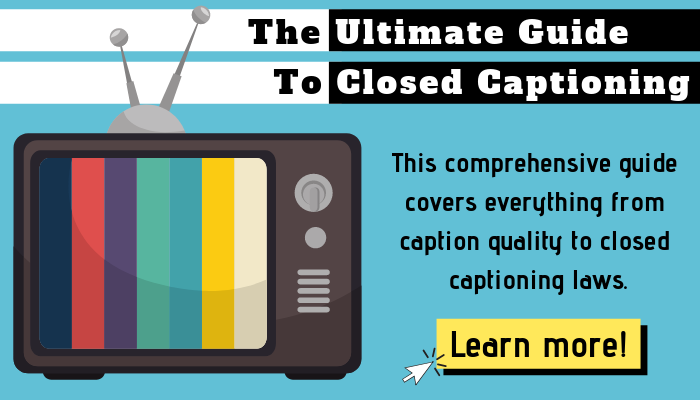