In this webinar, Dr. Katie Linder, the head researcher on the project, will present for the first time on the findings of an institutional survey about closed captioning in higher education. Katie will take a close look at the results from over 50 colleges and universities nationwide, focusing on the challenges of and solutions for captioning.

Earlier this year, the Oregon State University Ecampus Research Unit conducted two nationwide research projects on closed captioning in higher education. One of the projects focused on how colleges and universities are handling captioning at the institutional level.

In this webinar, Dr. Katie Linder, the head researcher on the project, will present for the first time on the findings of the institutional survey. Katie will take a close look at the results from over 50 colleges and universities nationwide, focusing on the challenges of and solutions for captioning.

Don’t have time to watch the webinar? Check out the Q&A portion below:

Are there any trends that you’ve seen among institutional subgroups (e.g., small versus large institutions, or public versus private)?

KATIE LINDER: I can’t speak to any trends on this webinar. But if we do look at trends we’re going to include it in the report. So we’re going to do breakdowns based on the various demographics that we had in terms of enrollment size and in terms of the regional accreditation, where folks are.

But I think that that’s a really important point. And given the size of many of these institutions, the fact that they’re coming from larger campuses systems, obviously, creating a systematic effort for closed captioning may be significantly more difficult than for smaller campuses. So that’s certainly a question that we’re going to be looking into and that will be included in the report.

Did you learn how many schools were using automatic captioning?

KATIE LINDER: It was something that was included in some of the answers. We saw a significant number of students that were using a third party [captioning service], but we didn’t necessarily differentiate between how much of that was automated.

Let me go back to the screen that was talking about who is providing the captions. You’ll see that automated software is one of the options. And you’ll see it’s a relatively small number given the number of institutions that responded to this study.

So we have only three institutions [using automatic captioning] for the face-to-face [courses], five for the online [courses], and two for the institutional [videos, like for marketing or public-facing purposes]. So I think it’s, again, a relatively small number given how many people responded.

“ In many cases, there was just one person answering this survey, although I do know that several campuses had a team of people who responded together to try to pool the information that they had. ”

KATIE LINDER: In a lot of parts of the survey, we left things open as broadly as possible. And in that case, we did not provide what “effective” meant.

The whole survey is really self-report. And a lot of people didn’t know the answers to the questions.

So I think that alone is an interesting component, that we had a lot of people who were just unsure of what was happening on their campus. And so the subjectivity, I think, is definitely an important point to raise. In many cases, there was just one person answering this survey, although I do know that several campuses had a team of people who responded together to try to pool the information that they had.

Did you learn anything about how institutions were tracking video inventory? KATIE LINDER: We did not ask specifically about how institutions tracked their inventory of videos.

I do know that we asked a couple more specific qualitative questions for people that said that they had institutional initiatives around captioning.

We asked them to describe what those were. So there were a couple areas where we went into more detail. But for the video inventory, we did not. And again, I would point to the fact that the survey was already so long. And we really wanted to make sure that folks would get through the whole thing.

I think that this points to one of the challenges of doing research about measuring the landscape of what’s going on with something like this across a nation. Besides the fact that our sample size was a little bit small here, I think that we’re trying to get at a lot of information that we only had anecdotal information for [previously].

This data– we’re really pleased with it. But I think it just scratches the surface of what we need to know in detail about what’s going on in our campuses regarding closed caption compliance and the different practices that are being used.

Did you provide different definitions for live captioning and closed captioning for use in face-to-face courses?

KATIE LINDER: No, there was not a differentiation for that. We focused specifically on [the term] “video.” I think that in many cases, there was a reference to video that was “pre-recorded.” And that was something that we used in the definition when we were talking about the compliance. That was the direction that we were going, but we did not necessarily differentiate between those two things.

Can you clarify what you mean by “monitoring closed captioned compliance”? (Referencing graph below) 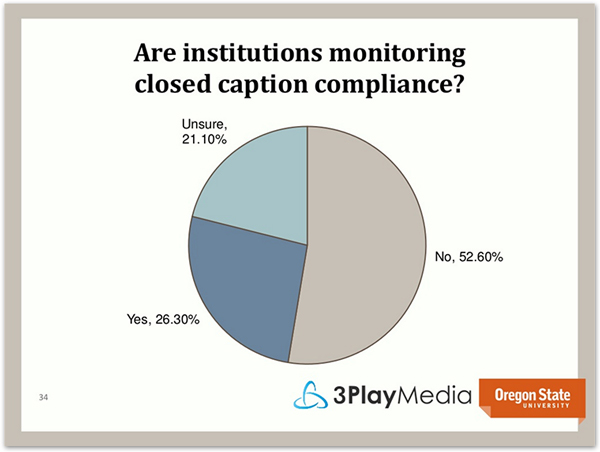 Now, for campuses that believed that accommodation is the requirement in terms of compliance, that monitoring would look different for their campus. So we left this open, again, based on what they [defined as] compliance for their campus. And we wanted to try to accommodate, for lack of a better word, the range of beliefs that people have regarding what closed caption compliance means for their institution.

Many community colleges are facing a budget crisis because of state disinvestment in higher ed. Has this study uncovered any places for colleges to find funding?

“ I think it was actually surprising […] that we had fewer people than I would have thought saying that budget was the reason that they weren’t able to provide closed captions. ”

KATIE LINDER: That was definitely not part of this study, and not part of our scope, because we were really looking internally into institutions […]. I think it was actually surprising, as I noted on an earlier slide, that we had fewer people than I would have thought saying that budget was the reason that they weren’t able to provide closed captions.

And I would imagine that many institutions are getting quite creative about how they use student workers and various other components to ensure their closed captioning compliance. So that’s a question that I might actually push back toward 3Play, as thinking about ways that institutions can find funding for this. And it may be an area that they have looked into more than what this study has covered.

Was there any investigation into third-party purchased instructional content, and to what extent that content was captioned?

KATIE LINDER: No, we did not look into that. It’s something that we certainly ask here at Oregon State when we’re working with third parties on instructional content […] we ask more generally about accessibility in terms of screen readability.

But closed captioning is certainly a [thing that we ask about], as well. Again, I would say that that’s another study in itself. And this one is just scratching the surface, as many of the questions are pointing out in terms of other things we need to be looking at.