Closed Captioning Requirement for Broadcast TV in the Philippines

Republic Act No. 10905, entitled “An Act Requiring All Franchise Holders or Operators of Television Stations and Producers of Television Programs to Broadcast or Present Their Programs With Closed Caption Options,” was sponsored by Senator Grace Poe.

As chairperson of the Senate Committee on Public Information and Mass Media, Senator Poe sought greater inclusion for people with disabilities.

“One of the objectives of this legislation is to provide our hearing-impaired access to news, entertainment, and information in promoting their welfare.”

Full realization of the goals of the measure is consistent with the Philippines Government’s commitment when it ratified the Convention on the Rights of Persons with Disabilities in 2008, which states that there should be full accessibility and recognition of the linguistic and cultural identity of persons with disability.

The measure was originally filed in a senate bill in May 2014, received approval in May 2016, and lapsed into law in July 2016.

Video producers and broadcasters are required to include closed captioning on TV programming in the Philippines. This applies to both news broadcasts and pre-recorded programs.

The National Telecommunication Commission (NTC) and the Movie and Television Review and Classification Board (MTRCB) are charged with enforcing these rules at the federal level.

Who exactly is liable for those fines and jail time?

In case the offender is a corporation, partnership or association, or any other juridical person, the president, manager, administrator, or person-in-charge of the management of the business who knowingly and willfully voted or assented or acted with bad faith and gross negligence to the unlawful act punishable under this Act shall be liable therefor.

This last condition is strikingly similar to the “undue burden” clause in the United States’ Americans with Disabilities Act.

Senator Poe tweeted the following infographic to educate the public about the new captioning rules: 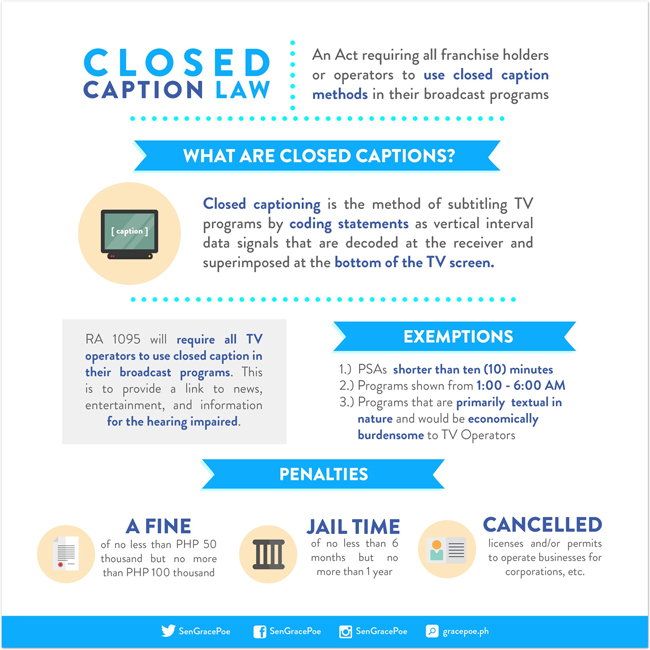 Everything you need to know about closed captions 👇