Faces Behind the Screen: Isaac Lidsky 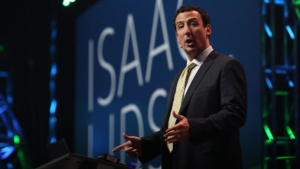 In the past decade, Isaac went back to his enterprising roots and founded two additional companies in the construction logistics industry and blockchain space, adding to his repertoire of successful entrepreneurial ventures. In 2017, Lidsky published his first book, Eyes Wide Open, which hit the shelves as a New York Times bestseller in March 2017. TED also invited Lidsky to present a mainstage talk at TEDSUMMIT 2016, which has been viewed more than 3 million times on TED’s site.

In 1993, Isaac was diagnosed with retinitis pigmentosa, a retinal degenerative disease that leads to progressive sight loss and blindness. To help those that are losing their vision, Isaac founded and oversees a national nonprofit called Hope For Vision, which he aims to speed the development and delivery of promising treatments that can cure blinding diseases.

Read on to learn more about Isaac’s eclectic background.

Tell us about your eclectic background, and how it led you to where you are today.

ISAAC LIDSKY: I guess you could say I’m a serial entrepreneur at heart, and I’ve been blessed to have a lot of different experiences, starting with a childhood acting career, a stint in law, and then several businesses that I helped to found. Along the way I lost my sight to a degenerative eye disease.

There is no readily apparent common theme to everything I’ve done. I’ve always had this idea that at any moment in time, we owe it to ourselves to take a look at who we are, and what we’re doing, and how we’re spending our time, and what our priorities are, and to try to create the realities we want for ourselves. That approach has manifested in a somewhat schizophrenic path for me. I’ve made some pretty big changes along the way as my answers to those questions evolved.

How did you initially find yourself interested in law?

ISAAC LIDSKY: My parents are Cuban immigrants. I’m first-generation American. Growing up, I followed my dad to court – he was an attorney, a very aggressive plaintiff side solo practitioner who built a law firm with a handful of lawyers in Hialeah, Florida, working primarily for Cuban immigrant clients. I idolized him, as I was always aware of the fact that he had an amazing and powerful perspective for how he looked at the world, how he solved problems, how he looked at rules, dynamics, and strategy. In the back of my mind, I knew I always wanted to go to law school to learn to think like my dad. In school, I was blessed with a powerful intellect. School came easy to me, and I enjoyed it immensely.

Growing up, I really loved math. It was another powerful framework with which to analyze problems rigorously. That was something that I was attracted to, and I initially started college with a plan to study math and physics. During my sophomore year, I took a computer science course as an elective and just absolutely fell in love with it, so I loaded up the remainder of my years of college with a lot of computer science classes. I wound up with a math and computer science degree.

It definitely seems like you had a lot on your plate. After graduating from Harvard at 19 – which is extremely impressive – how did you go on to found your first company?

ISAAC LIDSKY: When I graduated from college in 1999, which was at the very tail end of the dotcom boom, just before the bubble burst, my brother-in-law was thinking about starting up an internet advertising technology business, and reached out to me to see if I would be interested in helping run the software development end. He and I started that business in ’99, and shortly after we did, the dotcom world fell apart. We’re extremely lucky, because it was a very grueling couple of years. We were always on the verge of going out of business. But we managed to pull it off. We managed to actually develop some pretty neat technology and finally attracted some institutional money. It became a “real company” when we hired our own boss, which was a strange experience.

At that point, I ducked out and continued on my original plan to study law at Harvard, which was an amazing experience. I spent a lot of my time doing research for the Berkman Center for Internet and Society and was the first student to be named a fellow of that institute. It was the perfect time to study the burgeoning new field of internet law, or cyberlaw, to see how all these new technologies spawned by the internet age were going to relate to the existing legal structures, and how those structures would adapt.

How did you end up working as a clerk for the U.S. Supreme Court?

ISAAC LIDSKY: After I graduated from law school, I clerked for a year for Judge Tom Ambro on the U.S. Court of Appeals for the Third Circuit. Then, for a few years, I worked for the Appellate Staff of the Civil Division of the US Justice Department, which is a small office of lawyers who basically have responsibility for the country’s civil litigation docket in the intermediate appellate courts. Both of those experiences were amazing.

For DOJ, essentially, a year out of law school I was briefing and arguing my own cases around the country. I got to stand up and say, “May it please the court? I’m Isaac Lidsky with the Justice Department, here on behalf of the United States of America”. That never got old!

From the time I was a teenager, I always dreamed of clerking for the US Supreme Court. When I heard that the Supreme Court justices hire young attorneys usually only a year or two out of law school to do the bulk of the substantive work of the court, it just blew me away. An all-access pass to go behind the scenes at the Supreme Court was something I could not miss out on if it was at all possible for me.

I applied four years in a row for that job. It started to get a little grim. I used to joke that I was going to keep applying until I was older than the youngest justice. Blessedly, I only had to apply four years in a row before Justice O’Connor decided to hire me.

At that point, she had retired but continued to serve a judicial function, which means she kept her office at the court and sat by designation on the lower courts of appeal. I helped her with that judicial work. I also got to help her with speeches, and events, and things like that, which was amazing. She also “loaned” me to Justice Ginsburg for the Term, so I carried about a fifth of Justice Ginsburg’s work along with RBG’s four Clerks.

That sounds like an extremely busy time for you. What came after your stint with the Supreme Court?

ISAAC LIDSKY: After that, I accepted a job at a large international law firm. My wife was doing a graduate program in London, so I worked in London for a year, and then moved to the New York office.

In New York, my wife Dorothy and I had our triplets. Being a father of infant triplets, living in a two-bedroom apartment in Manhattan with a dog and a cat, being expected to work 90 hours a week for a cutthroat New York litigation group – none of that worked. I was pretty miserable.

In 2011, I unceremoniously abandoned my legal career, and with my college roommate, Zac Merriman bought a struggling construction subcontractor in Orlando, Florida, and moved my family down to Orlando to take the helm of that business. We’ve lived in Windermere, an Orlando Suburb, since then.

Faces Behind the Screen would like to thank Isaac Lidsky for participating in our storytelling project. If you’re interested in sharing your story with us, fill out our nomination form.