In the webinar, 2018 Legal Update on Digital Access Cases, Lainey takes us through key cases, court decisions, government agency activity, and other new developments in digital accessibility since her last 3Play Media webinar in September 2017.

One might ask, why is the law part of accessibility? The answer is a simple one: accessibility is considered a civil right for people with disabilities. When the Americans with Disabilities Act (ADA) was enacted in 1990, accessibility laws referred to providing access to transportation, employment, and housing. Since then, nearly 30 years have passed, the world has changed, and the term “accessibility” now extends its reach to mobile and web technology.

As Lainey touched on, the legal foundation for those with disabilities is strong in the United States, which has laws and regulations that support their right to accessibility. Although standards for digital accessibility are inconclusive at this stage, the level of support from legislation and court rulings has grown in recent years. 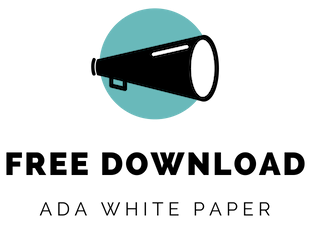 The ADA is a broad, anti-discrimination law for people with disabilities. Titles II and III of the ADA affect web accessibility and closed captioning. Lainey refers to the ADA as a strong civil rights act which requires effective communication and covers employment, education, and the public and private sector. Although the ADA often extends to digital accessibility, it lacks clear legislation and guidelines for companies and organizations to follow.

The Rehabilitation Act is a federal anti-discrimination law comprised of many sections: Section 504 covers federal and federally funded projects and programs, Section 508 covers Federal programs and agencies, and Section 501 & 503 provide guidelines for accessible considerations in employment. Each of these sections within the Rehabilitation Act directly references digital accessibility requirements.

The ADA and Digital Accessibility

While the ADA doesn’t provide specific digital regulations for the private and public sector, the Rehabilitation Act is more up to speed with digital accessibility standards, since its refresh in 2018. In 2010, the Department of Justice (DOJ) announced its plans to propose regulations which would govern website access under the ADA; however, the proposal recently placed on the “inactive list.”

It’s important to remember that just because the ADA doesn’t directly reference websites doesn’t mean that organizations should ignore the ADA. Lainey says “the absence of web regulations does not mean that the ADA does not require accessible technology.” Many judges agree with this sentiment based on their past court rulings. In the case of Access Now, Inc. v. Blue Apron, LLC (2017), the judge expressed that “the court will not delay in adjudicating [the] plaintiff’s claim on the off-chance the DOJ promptly issues regulations it has contemplated issuing for […] years but has yet to make significant progress on.”

As evidenced by the judge’s statement, the lack of ADA digital accessibility regulations is not an excuse for companies not to implement accessibility into their technology.

How Is the Law Being Used?

With the lack of clear language about digital accessibility requirements for the public and private sectors under the ADA, there’s been ample space for many digital accessibility lawsuits to take place. By the end of 2018, an estimated 1,500 digital access cases will take place. Ms. Feingold iterates that while the onset of the growing number of lawsuits isn’t bad, it’s not necessarily productive either. She urges companies and organizations to spend more time, money, and energy on improving the state of their accessibility programs rather than on fighting the law and any impending lawsuits. If there’s one thing to learn from these cases, it’s that the lack of clarity under the ADA produces inconsistency in court rulings, leaving companies fearful of being smacked with a lawsuit of their own. Because of this, companies are apprehensive to implement accessibility into their technology due to uncertainty and feel that they lack the knowledge needed to take the next steps. To avoid confusion, companies can follow WCAG 2.0 or 2.1 which provide guidelines on how to design, code, and structure internet technology in order to ensure it’s accessible for all.

The key to avoiding lawsuits is to bake accessibility into your organization’s culture. Both mobile and web technology owned by your company must be made accessible – other things like hiring a web accessibility coordinator, building a company accessibility policy, and implementing accessibility training all help to improve the accessibility landscape for people with disabilities.

Companies must shift their mindset and stop thinking of accessibility as a way to avoid a lawsuit, and instead, start thinking of it as a way to benefit the people they serve. It is then that a positive shift in the world of digital accessibility will take place and our society as a whole will benefit because of it.

Watch the full webinar below!

In order to ensure the success of each one of our customers, we have a line up of dedicated customer-facing teams equipped with the tools and resources to deliver the best possible customer experience.  In the first part of our three-part blog…