Back in September 2016, Guillermo Robles, a blind man, filed a federal lawsuit against Domino’s Pizza, claiming that because of the company’s inaccessible website he was unable to complete his attempt to order a customized pizza.

While the original ruling was that the American’s with Disabilities Act (ADA) didn’t apply to the web, the decision has since been reversed, when the Ninth Circuit recently ruled that Domino’s Pizza must make its website and mobile app accessible to blind people using screen-reading software.

“The alleged inaccessibility of Domino’s website and app impedes access to the goods and services of its physical pizza franchises – which are places of public accommodation.” – Judge Owens This case originally commenced on September 1, 2016, when Guillermo Robles claimed that Domino’s website and mobile app do not permit a user to purchase using Job Access With Speech (JAWS) screen-reading software. Additionally, the company also offered online-only discounts, which Robles said were effectively off-limits for him.

Robles stated that Domino’s Pizza failed “to design, construct, maintain, and operate its website [and mobile application] to be fully accessible to and independently usable by [himself] and other blind or visually-impaired people” relying on screen readers and thus prevented him from completing transactions, and thus Dominos.com nor the Mobile App are in compliance with version 2.0 of W3C’s Web Content Accessibility Guidelines (“WCAG 2.0”).

The key question in court became “whether and to what extent the ADA, a statute enacted before the widespread adoption of the Internet, regulates the manner in which companies can permissibly engage in e-commerce.”

While the Americans With Disabilities Act does apply to Domino’s website and mobile app, Domino’s argued that because the Department of Justice did not provide standards for online accessibility or offer technical assistance to enact such standards applying it in the lawsuit violated their due process. S. James Otero, presiding judge for the federal court found merit in Domino’s claims and Robles’ claims were dismissed in March 2017.

Reversal by the Ninth Circuit Court of Appeals 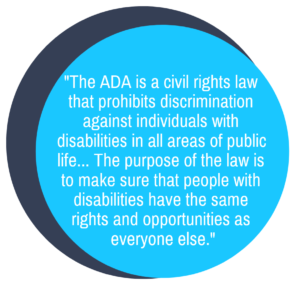 On January 15, 2019, this finding was reversed by the Ninth Circuit’s three-judge panel. They concluded that the company’s website and mobile app are critical avenues for the public to order online and find a nearby Domino’s restaurant.

Judge Owens wrote for the panel, “The alleged inaccessibility of Domino’s website and app impedes access to the goods and services of its physical pizza franchises – which are places of public accommodation.”

The Americans with Disabilities Act became law in 1990, and the company has known since that time that it must provide full and equal access to people with disabilities. Therefore, the panel found that imposing liability on Domino’s does not violate the company’s due process rights. The panel also pointed out that regulations from the Department of Justice have been clear since 1996 that such protection extends to websites.

Roble’s attorney, Joe Manning, Jr., was pleased with the outcome and felt the decision should be an easy one to determine.

“We’re very happy with this opinion because we think it will eliminate many of the common objections to accessibility and encourage companies to just start the process of making sites accessible instead of quibbling over the precise standard,” Manning said. “In the case of Domino’s, you can’t order a pizza. Isn’t that the test? We aren’t arguing over a comma here.”

What this Means for Web Accessibility

With the reversal by the three-judge panel, this case will now continue in the lower federal court in California. This strong opinion in favor of the ADA is a positive step for accessibility advocates. This opinion sets a good precedent for accessibility in the digital space, and confirms that despite a lack of clear regulations the ADA is still the law and companies still need to comply with it!

Is your organization’s website accessible? Start by getting your videos captioned today with the help of 3Play Media!