Earll v. eBay: Is a Website A Place of Public Accommodation?

When Melissa Earll sued eBay in 2013 for disability discrimination, she challenged lawmakers to examine how disability law applies to the web.

Her lawsuit raised the question: would an online-only business be considered a place of public accommodation under Title III of the ADA?

Courts struggle to agree on an answer.

Melissa Earll, a middle-aged deaf woman, intended to register as a seller on eBay so she could sell collectible items online. She ran into trouble with eBay’s seller verification system, which requires sellers to retrieve and submit a password via phone. Because she couldn’t hear the password, she was unable to get verified as a seller.

Earll argued that eBay’s system excludes deaf people from enjoying an otherwise publicly available service to sell goods on their website, and thus constitutes a violation of the Americans with Disabilities Act.

For that to hold true, eBay would need to be considered a place of public accommodation under Title III of the ADA. Courts had not yet examined Title III closely to determine whether or not it applies to websites, so this case would set a precedent.

Initially a federal judge dismissed the case for lack of evidence that Earll had in fact attempted to register as a seller after contacting eBay about accommodations.

Keep in mind that ADA does not require that all services be accessible to everyone, but only that reasonable accommodations be made to render such services accessible to people with disabilities when requested.

Some websites may not have the resources to provide full accommodations for the disabled, but a site like eBay does — and it should do so.

Eric Goldman, a professor of law at Santa Clara University, commented that “some websites may not have the resources to provide full accommodations for the disabled, but a site like eBay does — and it should do so.”

This still begs the question of whether the ADA applies to private company websites in the first place.

After the case’s initial dismissal, Earll filed an appeal with the Ninth Circuit Court of Appeals.

In April, 2015, the appellate court ruled that the ADA does not apply to online-only businesses, but only to physical places of public accommodation.

That same day, the Ninth Circuit ruled on a concurrent case, Cullen v. Netflix, stating that the ADA should not require Netflix to closed caption its online streaming video because it, too, cannot be considered a place of public accommodation.

This ruling was a major setback for disability advocates and deaf and hard of hearing people hoping for a more inclusive web.

“The legislative history makes it very clear that the ADA was intended to keep up with technological advances.”

The Earll v. eBay lawsuit resolved in favor of a conservative interpretation of the ADA, that websites and digital activities are not subject to the law because they’re not explicitly mentioned.

The ADA was passed in 1990, well before the internet became ubiquitous.

With that in mind, other legal experts disagree with the Ninth Circuit and argue that the ADA was intended to encompass all future technologies.

Arlene B. Mayerson, a prosecutor for the 2012 case NAD v. Netflix, thought that “the legislative history makes it very clear that the ADA was intended to keep up with technological advances.” In that case, the court ruled in favor of her interpretation of the ADA.

This is doubly confusing because that means there are two distinct lawsuits against Netflix about whether or not it should be considered a place of public accommodation — and the two rulings directly conflict.

Until legislators refresh the ADA with language that makes it clear how the law applies to the internet, the scope of places of public accommodation will remain in dispute. 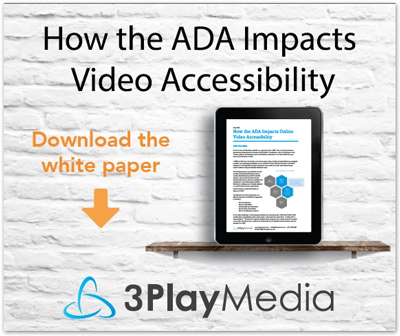 As online video consumption continues to expand – with the average person projected to watch 90+ minutes of video content online daily in 2020 – there’s one element of video distribution that cannot be ignored: captioning. Captions have become a helpful tool…

2020 Marketing Trends & What They Mean for Accessibility

It’s once again the roaring 20s – a decade that will likely bring extraordinary innovation and unprecedented challenges. This year, content will continue to be king, but the way we approach our content strategies is changing. “Spray and pray” strategies are no…